The biosphere is collapsing and dying as natural ecosystem loss, abrupt climate change, and grotesque inequity have so diminished natural capital that we find our well-being threatened by reduced material expectations, a state of perma-war, and escalating authoritarian fascism. Charlatan madman Donald Trump – aka #CreepyDonald – is a deranged, authoritarian wannabe-tyrant seeking to demagogue environmental collapse; and whose racist xenophobia, militant violence, and anti-science hate threaten America’s and the world’s final demise. It is the duty of every fair, decent, tolerant, freedom loving American to resist the rise of GOP authoritarian fascism and commit to peaceful, equitable, and ecologically sustainable advancement for all.

Human industrial growth has dismantled the ecological systems upon which healthy economies and societies are based.  Planetary ecological boundaries required for a habitable Earth have been surpassed as the human family finds itself in a state of ecological overshoot. Loss of natural ecosystems and a stable climate are already causing much conflict, suffering, and reduced opportunity for material advancement. Worsening environmental conditions threaten our liberty too as demagoguery flourishes.

Over the past 130 years the human population has grown from one to seven billion people, many of whom are living highly consumptive lifestyles, as others are mired in numbing abject poverty. This growth has come at the expense of destroying natural ecosystems. Massive economic expansion was easy when based upon liquidating ancient old-growth forests, bottom trawling bountiful oceans, and intensively over-exploiting soil. Now many of these natural resources are nearly exhausted.

Natural capital has perilously declined to such an extent that further widespread growth in material consumption is no longer possible. At least 90% of old growth forests and stocks of large ocean fish have already been harvested, and 50% of topsoil has eroded; as natural ecosystems that sustain life are destroyed for short-term profit. Abrupt climate change already routinely causes severe deprivation and dislocation.

A number of other threats are converging, greatly diminishing the global condition, and imperiling progress on environmental sustainability. Grotesque inequity – whereby one billion people live on under $1.50 a day as similar numbers live opulent lifestyles – is the norm and worsening. As is often the case during hard times, many are returning to millennia old religious myths that teach that those who believe differently are bad and should be killed. Remote-control christian militarism and radical islamic terrorism are rife, as murder in the name of god is again in vogue.

A state of perma-war has arisen. Eternal tribal conflicts have been exacerbated by a scramble to exploit the last bits of natural capital; which incidentally power the biosphere, providing the ecosystem habitats which make Earth livable. Rather than thinking freely and coming together for global ecological sustainability and lasting human advancement, we seek to murder each other in the name of god and country, as in reality we pursue natural resources at advantageous terms.

These converging global mega-crises are compounded by outright ignorance and anti-intellectualism by those that should know better, but rather seek to enrich themselves based upon the suffering of others.

It’s really quite simple: diminished economic prospects and social cohesion are the direct result of environmental decline. The expectation in much of the world that each generation will be materially better off can no longer be sustained by plundering remaining resource-rich ecosystems. Sadly, such simple and unquestionable truths are opaque to the many people who have lost their ecology ethic, and live vacuous lives in pursuit of more stuff, or scramble daily just to survive.

Our one shared biosphere is threatened with imminent collapse and death, as together we are all faced with nothing less than the end of being.

THE RISE AND FALL OF #CREEPYDONALD

Against such a backdrop of ecological, social, and economic decline; innumerable charlatan demagogues are rising, as is often the case when times are hard. Selling various brands of snake oil, they promise to make us safe, rich, and great again; if only they are given absolute power. While tyrannical forms of government are nothing new, and despite immeasurable human suffering during previous bouts of authoritarianism, our present condition of environmental scarcity has created the conditions for fascism’s resurgence.

Madman Donald Trump is the most obvious example of a deranged authoritarian, demagoguing reduced expectations brought about by environmental decline. Trump's scapegoating of the less fortunate, overt nationalism, racism and misogyny, and continuous threats of violence are classic fascism. Trump’s denial of incontrovertible climate change is ignorant and simply unforgivable charlatanism. His entire demeanor and agenda for America will worsen environmental decline and social discord. Mocking the disabled, saying he would date his own daughter, demeaning women and minorities, and Trump's supporters' Nazi salutes are downright creepy. Given Trump’s affection for derisive monikers, I have taken to calling him #CreepyDonald.

#CreepyDonald’s complete cluelessness regarding the root causes of decline indicate that he is really interested in absolute power, which once given, may never be able to be revoked. While concerns over security, jobs, and the deleterious impacts of uncontrolled mass migration are not without merit, the solutions are highly suspect. Trump’s agenda wastes time and diverts resources necessary to protect and restore nature to avoid biosphere collapse. Further division, conflict, and over-development are not the answer.

In the rise of #CreepyDonald we are witnessing the fall of America as a free and great nation (albeit imperfect and always striving for self-improvement). #CreepyDonald’s authoritarian tyranny is neo-fascism and if he seizes power will result in the fall of tolerant and decent liberal democracy in America. Nothing less than centuries of social progress – such as mostly ending slavery and achieving racial and sexual equality – are threatened by fascism’s return.

No matter the threat; dark, violent authoritarian fascism of the sort espoused by #CreepyDonald and the GOP in America, and countless other neo-fascists globally, is never the answer. #CreepyDonald is unfit, unstable, and unacceptable; and his anti-science, anti-intellectualism ensures global unsustainability.  At this critical juncture in history, Donald Trump must not be allowed to seize power.

GREEN LIBERTY IS THE ANSWER

Continuous expectations that each generation will be better off materially are no longer possible unless we replenish natural capital through a sustained program of ecological protection and restoration. Equitable economic advancement depends upon achieving a steady state economy, as we remain free by firmly rejecting authoritarian fascism.

Ecologically sustainable economic advancement requires skill and knowledge, and profound empathy and sharing with the less fortunate. Building a just, verdant, and equitable world depends upon returning to the land to grow products and services of lasting benefit that meet basic needs from creative self-expression with our minds and bodies.

Humanity finds itself hurtling through space on a 3.5 billion year old organism – called Earth by some, Gaia by others – which is collapsing and dying. We will only survive and thrive by coming together in common purpose to sustain natural ecosystems, remain free, and more equitably share nature’s bounty. To start we must #DumpTrump and firmly destroy all other threats to our liberty and ecology.
Posted by Dr. Glen Barry at 9:44 AM

Opinions are my own and not the views of my employer

Congressman Pocan (left) boasted of traveling to Costa Rica for Child Sex Tourism Update: I Remain Unbowed I was present as State Repre... 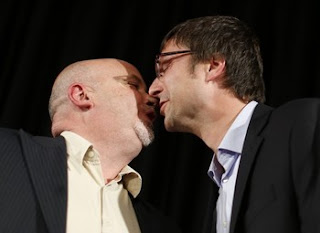